GOING TO SCHOOL ON BARE FEET AND ON AN EMPTY STOMACH

Due to extremes in poverty even till this publication a lot of kids and people in my area Muona in Nsanje Southern Malawi still live below the poverty line and with income less than one dollar per day. This makes it even harder for parents to provide 3 meals per day and instead they only afford one meal or 2 meals if they are lucky. Kids go to school on empty stomachs and completely on bare feet while very few might have access to slip ons and shoes. This situation is not different from that of my own time we afforded to go to school with bottles of roasted dry corn which we soaked in water and added some sugar if available at times, that provided for a breakfast at school and a lot of kids will follow the one carrying that for a share, life has never been easy.

This program has proven to help but not eradicating the hunger among kids, it provides soya mix (likuni phala) which is maize and soya flour plus beans fortified with micronutrients plus sugar for energy. This is made as porridge and shared once a day to pupils at school, thanks to everybody supporting this program. According to my observation not all schools benefitted from this. Others don’t have funders and donors to provide them with these meals and they are still struggling with hunger during classes and even at home 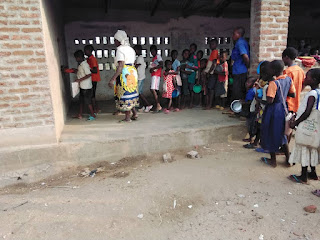 An area in Nsanje Southern Malawi, Malawi being listed among the poorest countries of the world and Nsanje and Muona in Malawi is one of the remote areas with little access to good roads and networks. The environment is so very hot and Nsanje registers the highest temperatures in Malawi, it reaches above 46 degrees Celsius during this time (summer) making it extremely dangerous for kids walking long distances to schools and on bare feet. During this time and even after there is great demand for clean water for drinking to keep hydrated.

During rainy season the area suffered a lot of flush flooding each year which were recorded worse in 2015 but not just that year, kids and parents have reportedly been washed away and gone missing while attempting to cross’s rivers, school blocked have been submerged and washed away including teachers houses and people’s fields and livestock. There has been great demand to build schools uplands and provide them with clean water, access to electricity and medical services so that they become attractive and friendly for use. We thank everyone in Finland (Helplines RY, and Malawi Children and Youth Support Organisation) for our beautiful and strategically located Nyaudzudzu Primary school.

CO-WORK AND AIM OF FUNDRAISING AND MY BACKGROUND

I would like to continue to say that I dedicated my time and energy supporting this project by managing all finances and overseeing the project and even working directly with the builders and all workers plus the community to bring out the desired and most beautiful results. Thank you Finland for believing and trusting me. I have my own things to do but I always find time for this project as I am writing this I have taken my annual leave and dedicate all this time to work for this project. I would like to urge more support from well wishers to help the African poor children - you never know you are raising the next leader and teacher and even next well wisher..

I struggled a lot with school in a family of ten and father was just but a small scale farmer - a years harvest was what we relied on to eat and he sold some farm products to buy the family needs up until the next growing season, which was not enough. I had a chance to wear a first covered shoe in secondary school but my whole eight years in primary it was not possible due to lack of money.
Dad (may his soul rest in eternal peace) couldn’t make it, we were more children and the family had a lot desired than a pair of shoes for me. I had a chance thrice or more my school fees in secondary was paid by world vision international donors when Dad was not able to.

I managed to go to college and studied certificate in clinical medicine fully sponsored by the government then and I graduated in 2009, and because of my passion in Muona I went to work at a government health centre as an I charge in Muona it is called Sankhulani health centre. I served my people for three years and proceeded to Nsanje district hospital for 6 years and now I am at Salima district hospital central Malawi but I still visit Muona at least every fortnight or one a month.

As we write we managed to hand over the school to government of Malawi but we struggled a lot, and we will continue to build structures and provide other needs under my supervision to meet our demands, hence I humbly request you to continue supporting the project, I won’t talk about the corruption and bad management of public funds here in Malawi by public officers, hence need to supervise closely. I can’t finish without a big thank you to Pauli Ross and Laija they visited me and introduced me to the rest of the people in Finland. I have worked so nicely with Pirkko Carpenter a very humble and encouraging woman who has always inspired me till now, thank as well to all people of Finland, may the almighty God be praised for ever as we continue to achieve greatly together.

Chikondi Valo is the headboy for the whole school as of now, in an interview with John Alimoni he mentioned that he was so thankful to the people of Finland due to the tireless efforts shown in building Nyaudzudzu Primary school. He saluted the site choosers as he mentioned that the school is far from main and busy road which will protect pupils and teachers from road traffic accidents. He also said because it is located up hill they are safe from floods.

He has a dream of becoming a lawyer and really feels like defending victims and protecting the laws of his country and everyone else.

The headgirl is Funny Joseph she shares the same feelings and appreciate the development happening at Nyaudzudzu and she dreams to become a Police lady, this is the story of Nyaudzudzu Primary. 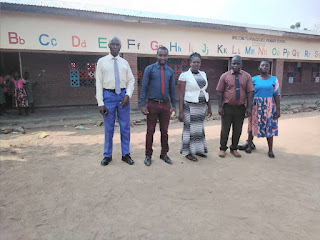 There is a lot of potential to develop and empower the pupils and people of Alumenda village group village headman Nyaikha in Muona-Malawi, the elderly have lots of skills in this village and a lot of income generating activities including producing local knives, weaving mats etc, if these skills plus many more could come and be taught to the children at this school it means they will benefit a lot and help themselves even after school to earn a living.
Lähettänyt Lea Marttila-Hossain klo 19:57 Ei kommentteja: